Manual Valuing Animals: Veterinarians and Their Patients in Modern America

In the s, pets were a luxury, horses were the primary mode of transport, and nearly half of all Americans lived or worked on farms. Today, the pet industry is a multibillion-dollar-a-year business, keeping horses has become an expensive hobby, and consumers buy milk and meat in pristine supermarkets. Veterinarians have been very much a part of these changes in human-animal relationships. Indeed, the development of their profession—from horse doctor to medical scientist—provides an important perspective on these significant transformations in America's social, cultural, and economic history.

In Valuing Animals , Susan D. Jones, trained as both veterinarian and historian, traces the rise of veterinary medicine and its impact on the often conflicting ways in which Americans have assessed the utility and worth of domesticated creatures. She first looks at how the eclipse of the horse by motorized vehicles in the early years of the century created a crisis for veterinary education, practice, and research. In response, veterinarians intensified their activities in making the livestock industry more sanitary and profitable. Beginning in the s, veterinarians turned to the burgeoning number of house pets whose sentimental value to their owners translated into new market opportunities. 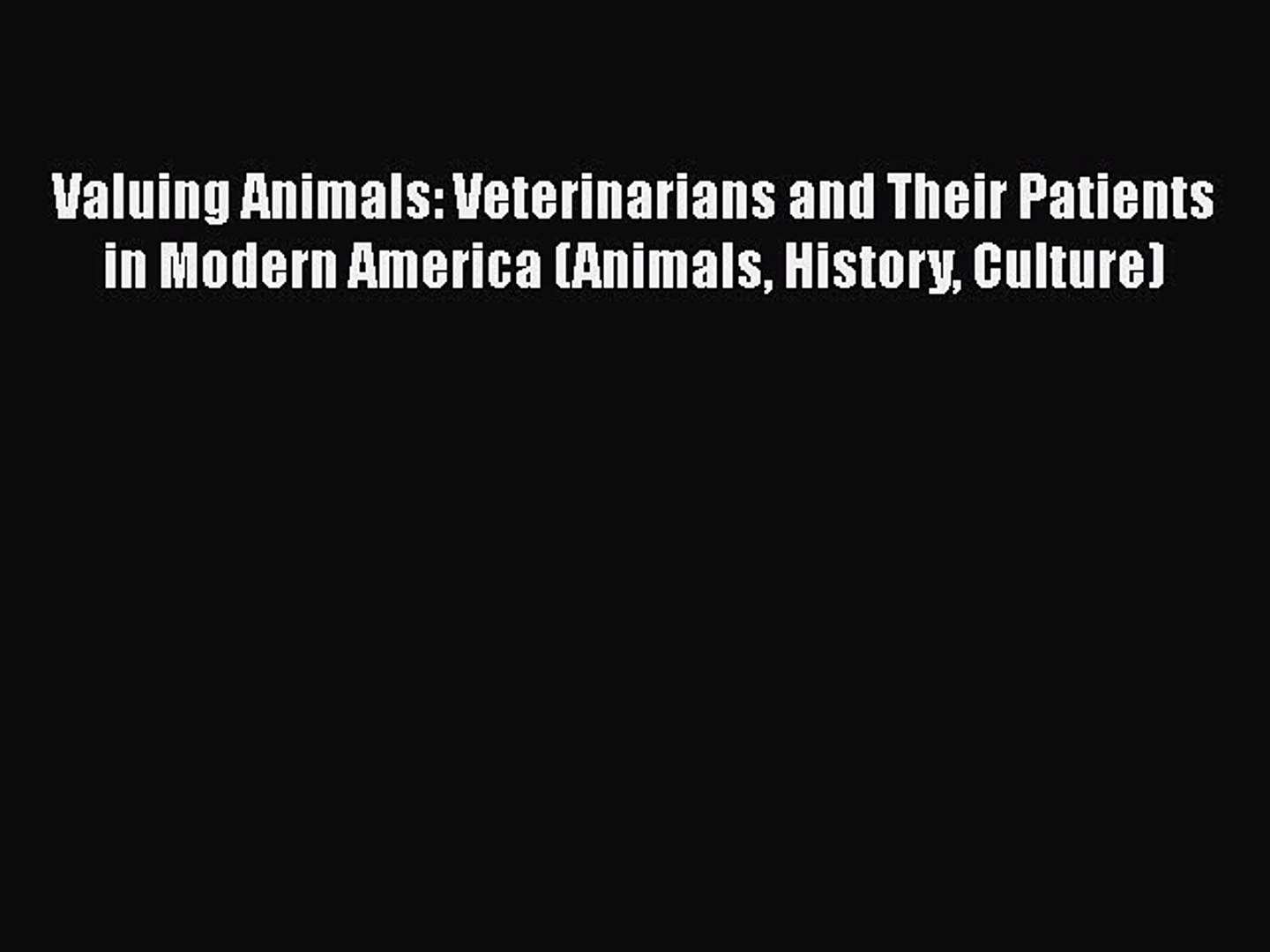 Jones describes how vets overcame their initial doubts about the significance of this market and began devising new treatments and establishing appropriate standards of care, helping to create modern pet culture. Americans today value domestic animals for reasons that typically combine exploitation and companionship. Both controversial and compelling, Valuing Animals uncovers the extent to which veterinary medicine has shaped—and been shaped by—this contradictory attitude. Military and industrial research was entangled and Innes would continue pursuing government-funded research after leaving Brookhaven.

But even here American public health grants, other national government funding and supranational organisations such as the World Health Organisation were crucial in bolstering research opportunities and institutional settings for comparative neuropathology and veterinary pathology. It, moreover, revealed fears about a world of proliferating neuropathologies and a new post-war effort to describe, and exploit, the vulnerabilities of the nervous system.

Veterinarians, for instance, were turning to the literature to assess whether congenital malformations in Hereford cattle and other livestock were hereditary, associated with nutritional deficiencies or maternal ill-health, or due to environmental poisonings by plant or synthetic chemicals. Malformations had occurred before the s, but changes in livestock production were altering morbidity rates and placing more emphasis on accurate diagnosis. Interbreeding caused by an increasing reliance on artificial insemination was amplifying degenerative hereditary conditions.

Poisoning with herbicides, pesticides, and other newly synthesised substances were becoming more common.

Questions of malnutrition had implications for the use of feeding supplements. By plans for preventative medical care, better animal hospitals, and a large range of veterinary pharmaceuticals offered new opportunities to see and treat animal patients for an expanded range of conditions and in well-resourced settings that paralleled those provided in human medical care.

Knowledge of the nervous system, long considered to be too complex for non-specialists, was becoming obligatory for veterinarians who were assessing, and treating, cases of herniated disks, movement disorders, seizures, and non-infectious, chronic illnesses. New textbooks, published in the s and s, promised to make the field more accessible. The later Canine Neurology: Diagnosis and Treatment , written by a veterinary surgeon, presented an even larger world. Other estimates differed with some expecting one in ten veterinary cases to require neurological knowledge.


It also illustrated the significant growth in the care for chronically ill pets and other animals. His own account was based on a translation of practices in neurophysiological laboratories to clinical practice. It also found audiences in those caring for animals in toxicological laboratories. In his review of Neurologic Examination of the Dog Innes therefore commented,. Dogs are being used more and more by pharmacologists, toxicologists and pathologists for so-called chronic toxicity experiments.

In some cases chemical compounds are given over many months to define possible toxic effects. The previous section discussed that the inclusion of Minamata Disease, cerebellar malformations in Hereford cattle and nerve system damage due to pharmaceuticals highlighted that Comparative Neuropathology portrayed a world of proliferating neuropathologies, but the analysis of chronic diseases and growth of a literature dedicated to treating and assessing neurological conditions in animals also revealed a world of proliferating sites of comparative neurology and neuropathology which in turn were probing neuropathological conditions previously unknown or unexamined.

To document and organise the proliferating material on neurologic disease, Innes and Saunders leaned on classic techniques of histopathology to identify changes in nerve cells, lesions in nervous tissue, their distribution patterns and their possible correlation with clinical syndromes.

Particularly in contentious established categories, Comparative Neuropathology retraced the publication history and construction of disease classifications to illustrate historically contingent interpretations and undermine cherished neurological concepts. Innes and Saunders asked whether researchers had eagerly embraced demyelination as a definitive disease process due to use of myelin stains and due to academic interest in myelinating processes in early childhood.

Descriptions were bundled though the organisation was flexible. Early chapters outlined pressing specialist questions in research and practice including Fankhauser on assessing cerebrospinal fluid and the neurologist Ludo van Bogaert on primate neuropathology.

A chapter on congenital and hereditary conditions was followed by chapters on infectious diseases, post-viral complications and experimental encephalitis, that occupied a third of the book. Pathology was a science, they insisted, not merely a tool to confirm diagnoses post mortem. Nonetheless, the science of comparative neuropathology they envisaged was eminently rooted in clinical practice. Local particularities of the case mattered, rare cases and rare diseases were included in discussions, and the analysis hinged on the figure of the clinician in that it depended on clinical acumen in identifying typical pathological patterns in nervous tissue, differentiating normal and pathological changes, and noting clinical and pathological resemblances to diseases in other species.

Comments indeed left little doubt of their personal opinions. The case of scrapie demonstrated the potential of a more comparative approach. Researchers subsequently commented on possible infectious agents, core resemblances, and transmission pathways between these diseases and Creutzfeld-Jakob disease. The case of scrapie vindicated those who considered neuropathology one of the most promising site for insights gained by analogy.

Comparative Neuropathology mapped onto high-profile research on neurological diseases. The chapter on primate neuropathology addressed recent difficulties in developing and testing polio vaccines, heavily reliant on primates and knowledge of primate neuropathology. Reception was mixed. In its collection of cases Comparative Neuropathology embodied a particular moment in the early s when researchers, in probing the nervous system, also amassed an increasing body of knowledge about the vulnerabilities of the nervous system.

To marshal these constituencies, Innes and Saunders, their co-authors, and colleagues gathered this information into a more coherent structure. Studies of kuru and scrapie therefore had a platform of more scattered alternate sites. In the late s Innes imagined a multi-authored volume with contributions from colleagues in North America and Europe, but Comparative Neuropathology was never revised or reissued.

Comparative Neuropathology benefited from renewed interest in human neuropathology, which was flourishing in the post-war period due to the expansion of neurosurgery, tissue cultures, and new techniques such as electron-microscopy and histochemical stains.


Neuropathologists increasingly situated themselves as experts in identifying diseases of the nervous system and therefore vital team members for experimentalists, neurologists, and neurosurgeons. They argued that they alone were able to differentiate between spurious findings, coincidental pathologies, significant lesions, and resemblances to historical accounts, thereby guarding neurological sciences as a whole against the proliferation of disease classifications. They drew together researchers in biophysics, biochemistry, neuroanatomy, psychiatry, psychology and a flourishing cadre of cognate field.

Mirroring the arrangements of inter-war comparative medicine, Innes and Saunders hoped to benefit from this funding, professional positions, and prestige associated with the neurosciences, the biological sciences, and medicine. Their morphological approach, however, was at odds with contemporary research funded by organisations such as the National Science Foundation, which hardly supported anatomical studies. For Innes, Saunders, and their peers, comparison guarded against over-specialisation and allowed researchers to trace the range of reactions to trauma, pathogens, environmental conditions, or evolutionary change as if to contextualise experimental results.

Researchers, moreover, could consider a variety of sources—from historical case reports to bacteriological findings to epidemiological studies—to shape their discussions. Transcending limited sources and appropriating material across disciplinary boundaries was therefore encouraged, even as an insistence on meticulous histopathological analysis and clinical acumen set out to protect comparative neuropathology against incursions from other specialists. In rebuffing an exclusively molecular focus Comparative Neuropathology chimed with organismic biology and similar efforts in the s that rejected the molecularisation of biology and explanations of living processes in the terms of physical sciences.

Their insistence on species variety also concurred with similar comments in post-war comparative psychology and comparative physiology. Reflecting a heterogenous landscape in the neurological and the biological sciences Comparative Neuropathology sought to garner support from its multiple strands including the resurgence of comparative medicine. Veterinarians, veterinary public health officials, and veterinary pathologists argued that their insights into conditions in multiple species gave them a privileged vantage point to direct research and manage human and veterinary diseases and disorders.

Advocates, often veterinary public health professionals associated with large international health organisations, showcased zoonoses and infectious diseases, but some campaigners also discussed other causes of animal and human ill-health. By the late s authors expanded the remit to chronic, degenerative, non-infectious illnesses such as those profiled in Comparative Neuropathology.

Whereas the cardiovascular system was known to be a major cause of mortality in humans and was becoming the site of significant medical interventions, its pathologies and chronic conditions in animals were hardly understood.